How Much Does it Cost to Install an Alarm?

Wondering how much does a right alarm system cost you? Well, the average cost of a home security system depends on your home, your preferences, as well as your budget. Alarm features like a full-colour HD doorbell camera, 24/7 wireless monitoring, long-distance alert notifications, high-capacity DVR or NVR, door sensors, two-way talk, smart home automation, integration and other such security essentials are the main cost deciding factors.

To determine the average cost of a home security system, you have to look deep into the type of features you want to have in the right alarm system.

What Are The Features of a Right Alarm System?

Expect the following features in a modern yet cost-effective alarm system:

Burglar Alarms – Intrusion alarm is basically a series of electrical components linked to a home. The alarm is triggered upon detecting motion.

Smart Locks – An alarm system can be integrated with a door access control system (ACS). ACS consists of electronic keys to unlock the door.

Motion Sensors – Sensors of an alarm detect movements. If motion sensors detect unauthorized entry, a loud sound is produced to alert the authorities.

CCTV Camera – An average cost of an alarm system depends on the type of camera system you buy. A camera system can be wired or wireless to transmit footage and conduct 24/7 monitoring and video surveillance.

Speakers – A right alarm system comes with fully functional speakers. When the alarm is triggered and the siren starts operating, the speaker beeps to alert the house owner.

What Type of Alarms Systems Can You Buy At Cost-effective Price?

(1) Wireless Home Alarm System – It consists of a control panel as well as a series of sensors. Once motion is detected, an alarm is triggered and as a result, signals are transmitted to the control panel, which subsequently activates the alarm.

(2) Wired Home Alarm System – It consists of cables to transmit and communicate. In this scenario, tangible wires of the right alarm system connect the sensors and cameras.

(3) Unmonitored Home Alarm System – It affects the average cost of a home security system. In fact, it’s comparatively cheaper, as it doesn’t notify the emergency service directly. When the alarm is triggered, someone near your house has to alert the emergency service.

(4) Monitored Home Alarm System – It notifies you as well as notifies the emergency service so that they can send out instant help for you.

How to Find Quality Yet Affordable Alarm Installation Service?

If you’re looking for not only a right alarm system but also a right alarm installation service provider, Abeera LTD can be the best choice for you – as they’re currently providing their customers with a wide range of security alarms and surveillance systems at competitive costs. Thus, to get an instant quote or an estimate or to find out an average cost of a home security system, get in touch with experienced technicians and installers via 020 3737 3990 or sales@abeera.co.uk. 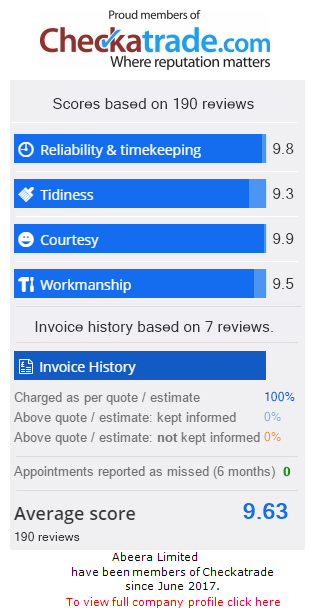